Putting the ‘power of the pause’ to work for you 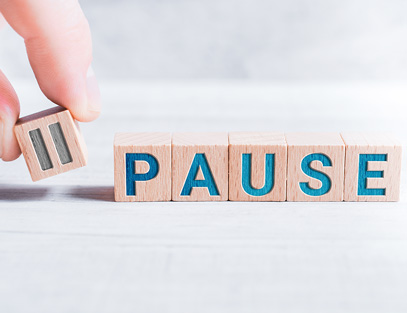 The flight attendant knelt beside a man sitting across the aisle from me and read off the dinner menu (yes, this was a long time ago, when airline passengers on airplanes not only were served dinner, but also had dinner choices).

The man, not a native English speaker replied, “I’d like steakchicken.” The ensuing confusion could have been avoided had someone taught the well-meaning flight attendant about what I call the “Power of the Pause.” (I was about 20 at the time and hadn’t yet evolved to where I knew about this — or had the courage to talk to a flight attendant.)

The point is this: Sometimes the best way to make yourself clear is by taking a breath and not saying anything.

Click to tweet: Sometimes the best way to make yourself clear is by taking a breath and not saying anything. Used in the right places and at the proper cadence, the “Power of the Pause” is a useful addition to a speaker’s toolkit. http://ow.ly/IOws50DJ2PZ @taftcomms #publicspeaking

Often, I notice that people making a speech or giving a presentation sabotage their impact by using grocery-list style. It’s like saying you need “milkeggsandbread” at the supermarket. Instead, say, “Milk. Eggs. And Bread,” going even beyond the spoken equivalent of a comma and using a period. It gives what you say more emphasis.

The danger of putting too little separation between items in a spoken list is that, even if people can understand your words (unlike my unfortunate aisle-mate who was probably disappointed to find out a delicacy he’d never imagined before didn’t, in fact, exist) they likely won’t get the import of what you’re trying to communicate.

Imagine going to a concert where the orchestra members never pause after a note. You’d hate it. The only upside would be that it’s over quickly.

Without notes being withheld and breaths taken, the music just wouldn’t “land.”

The power of the pause also works for you as a speaker when you want to transition from one topic to the next. In writing, you have to use words for that. In speaking, it’s better not to. Just take a couple of beats and go on.

Every power, though, carries with it the danger of abuse. That happens if the pause is too long. A couple of extra beats and your audience might move from heightened interest to alarm, wondering if you’re about to keel over.

Used in the right places and at the proper cadence, the Power of the Pause is a useful addition to a speaker’s toolkit.

If you’d like to learn more about how to be more effective in front of an audience, check out Taft’s ClearPoint offerings, or get in touch.