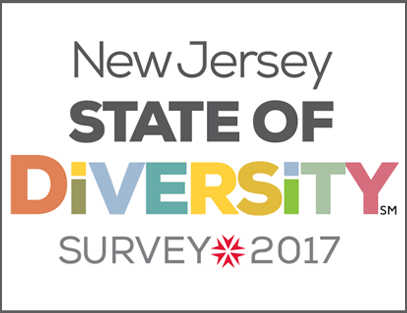 High sensitivity on workplace discrimination and strong willingness to report it

LAWRENCEVILLE, NJ, (May 17, 2017) — New Jerseyans are much more likely to interact daily with someone of a different race or ethnicity at work than elsewhere, and younger people are most likely to experience diversity both in and out of work, our second annual New Jersey State of Diversity Survey finds.

Among all employed New Jerseyans, 86% said they interact at work daily with someone of a different race or ethnicity, compared to just 64% who do so outside of work. The gap narrowed significantly among those aged 18-34, with 91% saying they interacted daily at work with people of a different race or ethnicity, and 77% saying they did so outside of work.

How often do you interact with someone of a different race or ethnicity from yourself in your workplace?

How often do you interact with someone of a different race or ethnicity from yourself outside of your workplace?

This is the second year Taft Communications polled New Jerseyans to gain insights into the state’s diversity and public attitudes. This year’s poll was developed in conjunction with the New Jersey Business & Industry Association. The survey was designed with, and conducted by, Fairleigh Dickinson University’s PublicMind poll. The survey is based on the responses of 612 randomly selected working adults in New Jersey, conducted January 25-29.

“The State of Diversity poll is meant to shine a light on an issue of critical importance and to promote discussion in New Jersey about how we are living and working,” said Taft President Ted Deutsch. “Many New Jerseyans work in a city or town they don’t live in, and the Taft-FDU survey results suggest that diversity is greater in the state as a whole than it is in individual communities.”

Some findings from other sources help put these poll results in context:

“New Jersey is a true melting pot, with opportunities everywhere to connect with people whose culture and heritage are unlike one’s own,” said Krista Jenkins, professor of political science and director of the FDU PublicMind poll. “Yet, this survey once again reveals that many still gravitate to people like themselves when unconstrained by the dynamics of the workplace.”

On a more encouraging note, the State of Diversity poll results also suggest a high degree of sensitivity among New Jersey employers to issues concerning discrimination, and considerable comfort among employees when it comes to reporting discriminatory behavior. Asked if their employer has in place a policy banning workplace discrimination, 78% said yes overall. Breaking it down further, 74% of private sector employees answered yes, compared to 80% of public workers, and 94% of those employed by nonprofit organizations.

“Being one of the most diverse states in the nation, it is good to see that New Jersey workplaces are creating environments sensitive to that diversity,” said Michele Siekerka, President and CEO, New Jersey Business & Industry Association. “Employers know the importance of effective policies that make employees comfortable reporting inappropriate behavior. The survey shows these policies are having their intended effect.”

Full methodology, results and tables are available here or at publicmind.fdu.edu.

View the results of the 2016 New Jersey State of Diversity Survey here.

Taft is a New Jersey-based team of communications strategists with 30-plus years of experience creating and implementing targeted solutions for mission-driven clients across the globe. The Taft team is composed of experienced professionals from diverse backgrounds and industries working together to respond to both internal and external communications challenges. Clients include foundations, Fortune 500 companies, hospitals and universities, and environmental and nonprofit groups. The firm has particularly in-depth experience in the health, life sciences/biotech, public policy/education, and environmental/energy sectors. Taft’s ClearPoint division provides today’s leaders – and tomorrow’s – with courses, clinics, and coaching to help them manage the “constant conversation” that defines leadership. Learn more at taftcommunications.com and follow @TaftComms on twitter or Facebook.com/TaftCommunications

The Fairleigh Dickinson University PublicMind survey was conducted by landline and cellular telephone January 25-29, 2017 among a random statewide sample of 612 employed residents. Results have a margin of sampling error of +/- 4.7 points, including the design effect.