Debating the Significance of Presidential Debates 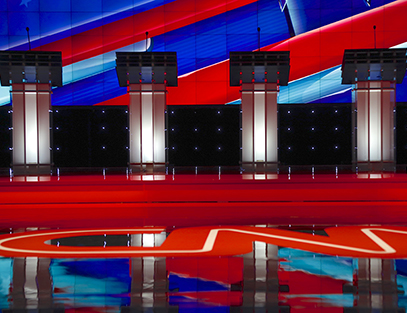 With the presidential debates already underway and the prospect of dozens more to come before the November 2020 election, pundits are tripping over each other to pronounce winners from among the 20-plus contestants. I can’t help but think about the meaning of such performances — or lack thereof — over the several decades I’ve been observing these rituals.

As a reporter for The Record newspaper in Bergen County, I covered a debate during U.S. Sen. Bill Bradley’s first reelection campaign in the early ‘80s that stands out in my mind because something out of the ordinary occurred.

Click to tweet: Do #presidentialdebates matter? @JonJShure says it’s important to “look beyond the moments of drama that dominate news coverage. Only then can we get a real sense of the man or woman we think can lead best.” http://ow.ly/fuKN50w7loT @taftcomms

Each candidate was allowed to ask the other a question. Bradley read from a list of Senate bills for which he had voted, and asked his opponent, Montclair Mayor Mary Mochary, if she would have voted the same way on any. He physically handed her the list. Surprisingly, she took the bait, and proceeded to cite several where she acknowledged their positions were the same. But it was a list of votes her campaign had criticized him for.

Of course I wrote a story saying that Mochary admitted she would have voted with Bradley on several pieces of legislation that she had previously criticized him for supporting.

Hypocrisy on such clear display is news. Did it mean he “won” the debate and she “lost” it?

Who knows? He went on to win the election by such a wide margin that it’s hard to imagine a single debate mattered one way or the other.

Yet it highlights that the usual takeaway from a debate is that the candidates deliver some temporarily memorable lines, flub some questions, and spend a lot of time repeating practiced responses that please their supporters and anger their detractors. Sometimes, someone says something outrageous. That was especially the rage during the 2016 presidential cycle. What seems to matter most, though, isn’t what they said or didn’t say, but how what they said or didn’t say is interpreted and passed along by the army of print, broadcast, and online pundits who have no compunction about picking winners and losers, deciding who exceeded or underperformed expectations, and telling us what the “optics” were.

If voters really want to make up their own minds, they’ll have to tune out egomaniacal moderators, look past stages that look like game show sets, ignore the planned spontaneity of well-practiced zingers, and focus on glimpses into the leadership potential of the candidates.

You don’t need to be a communications pro to glean insights. What is the temperament of a candidate when faced with aggressive or provocative questioning? Are they good at using such questions as a vehicle to make a larger point? How they handle interruptions, or how aggressively they assert themselves to gain the attention of pundits, is less important. After all, handling interruptions is not a frequent challenge for a sitting president.

Beyond the rehearsed openings, anecdotes, and closings — any actor can master that — is the candidate able to communicate any major themes or goals that might inspire and unite the nation? Does a coherent view of the world tie together their answers to various questions? In answering policy questions, does the candidate reveal knowledge and substance of problems facing the country, rather than flying at an ideological 30,000 feet?

With cable TV and the Internet, it’s never been easier to get the take of “experts” after a presidential debate. But it’s important for us to watch the debates ourselves, and look beyond the moments of drama that dominate news coverage. Only then can we get a real sense of the man or woman we think can lead best.