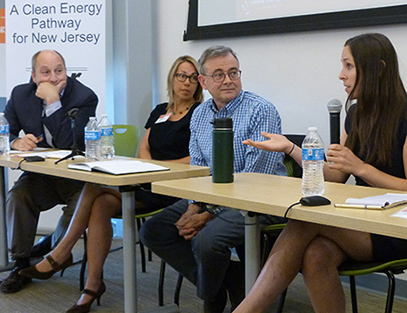 The first project was a groundbreaking new report that outlines affordable alternatives to harmful fossil fuels in New Jersey. Authored by a team of national energy experts, the first-of-its-kind analysis presents a three-part approach to clean energy alternatives in New Jersey, showing how the state could lower harmful carbon emissions and save ratepayers money while meeting New Jersey’s 2030 emissions goals. In a rollout that included a press conference and an invitation-only symposium, Taft guided its client to present the distinctive report to the technical and political audiences that most needed to hear its key messages. These included top energy and environmental journalists, regulators from multiple state agencies, elected officials from the local to the state level, policymakers, and diverse regional environmental and organized labor groups.

The report was unveiled on the heels of another key client deliverable: a statewide poll demonstrating the overwhelming public support for moving New Jersey away from fossil fuels and accelerating embrace of renewable energy. Supported by branded materials, media outreach, social media infographics and a video showcasing the poll results, the report and Fairleigh Dickinson University PublicMind poll were strategically released in the weeks prior to the state’s gubernatorial debates, at a time when both candidates for governor had expressed concerns about gas pipelines and support for renewable energy.

“This client and these reports represent what we do best,” said Taft Vice President Jayne O’Connor. “Armed with credible data and great media, we are working with ReThink Energy NJ to inspire key audiences to moves us more quickly to a clean energy future.”

Read More
Harnessing the energy of employees to protect the planet

Harnessing the energy of employees to protect the planet