Always say what you are, not what you’re not 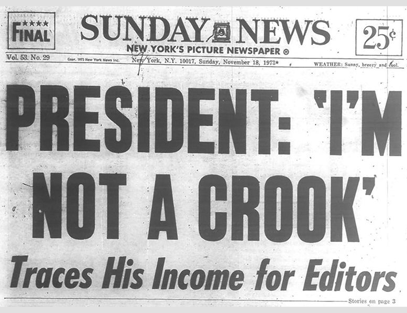 It’s a simple rule, but often not followed by people trying to get their point across in the media. The classic example I always use when doing communications training took place in November of 1973 and lives on in the annals of miscues.

President Richard Nixon, under increasing pressure during the Watergate scandal, was in Orlando, speaking to a gathering of 400 managing editors of news outlets affiliated with the Associated Press. Of course, the editors had been running stories for more than a year about the 1972 burglary at the Democratic National Committee offices at the Watergate Hotel in Washington, D.C. that turned out to have been the work of Nixon’s reelection committee. The robbery and, more important, the coverup would lead to Nixon’s resignation.

Nixon wanted to make it clear to the editors that he didn’t make money off his public service. “I have earned every cent,” Nixon proclaimed. “And in all my years of public life, I have never obstructed justice. People have got to know whether or not their president is a crook. Well, I’m not a crook. I’ve earned everything I’ve got.”

What he should have said would have sounded more like this: “I have earned every cent, in all my years of public life. I believe public service should not be a path to profit, and I live by those beliefs.”

Most of us say things that will never make the front page of the nation’s newspapers. But we often find ourselves in situations where we need to address an issue that has put us on the spot. At the very least, answering the way Nixon did comes across as pathetically defensive. Plus, it repeats the accusation made against you, which has the effect of framing the narrative that your opponents are using rather than creating your own, assertively positive narrative.

Suppose, for example, you support the transition to clean energy and a reporter, picking up on the pro-fossil fuel narrative favoring building pipelines and related infrastructure, asks, “Why do you want to kill jobs?”

What you do say is, “I want to create jobs — good jobs, the kinds of high-paying local jobs that the switch to solar and wind power will bring.”

If you want to change your narrative for the better, we can help. I’m not lying — er, I mean, I’m telling the truth.