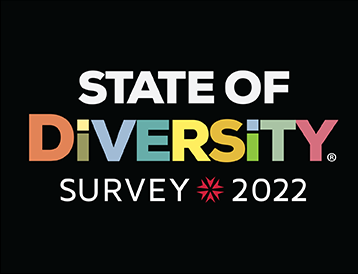 LAWRENCEVILLE, NJ (March 15, 2022) — America’s workplaces are on the leading edge of the US becoming a more pluralistic nation — offering greater exposure to diversity than what individuals may experience in their home and social interactions and staffed by people who want their employers to promote diversity and inclusion in the workplace, a Taft Communications and Rutgers-Eagleton Poll State of Diversity® public opinion survey of American workers finds.

This general consensus, though, masks deep divisions according to race, gender, age, education and other categories – not least of which is political affiliation.

“After five years of observing these trends in our home state of New Jersey, we were excited to expand our State of Diversity survey nationally to see how workers across the country view these critical issues,” said Taft CEO Ted Deutsch. “While there are many encouraging macro findings related to DEI in the workplace, the divide in perceptions by race, gender, politics, and sexual orientation are a distressing confirmation of the increased polarization we see in so many aspects of American society.”

“It is more important today than ever to measure and quantify workers’ views on diversity in the workplace and begin to assess whether real progress is being made or we are just saying the right things. In this benchmark survey, we see markedly different personal experiences and perceptions of the workplace, remote work, and the pandemic’s impact, as well as opinions on what employers should do to support workplace diversity,” said Ashley Koning, assistant research professor and director of the Eagleton Center for Public Interest Polling (ECPIP) at Rutgers University-New Brunswick.

Overwhelmingly, majorities view racial and gender diversity as important in the workplace: in each case, about half say it is “very” important, and another three in 10 say it is “somewhat” important. About one in 10 in each case say it is “not very important,” and one in 20 say “not at all important.”

There are big divides on how important diversity is based on political affiliation and race. Democrats (63%) are more likely than independents (54%) and Republicans (36%), and women (58%) are more likely than men (48%) to say racial and ethnic diversity is “very important” in the workplace. Three-quarters of Black respondents say it is “very important” (75%), compared to just under half (48%) of white respondents and over half (55%) of Hispanic respondents.

Solid majorities feel it is their employer’s responsibility to promote inclusion: 56% say employers should commit to increased efforts toward more diverse hiring practices and 59% favor employers making efforts to build a more inclusive workplace culture. Women (61%), employed people aged 18 to 34 (64%), and those who identify as LGBQ+ (68%) are more likely than their counterparts to say employers should commit to increased diversity in hiring practices. The number rises even higher among more highly educated workers, with 76% of respondents who completed graduate work saying they believe employers have a responsibility to build a more inclusive workplace.

People are much more likely to interact at work with those of other races/ethnicities than they are likely to do outside work: 68% of the employed people surveyed say such interaction at work is on a daily basis for them; when it comes to interactions outside of work, however, 50% say they have these interactions daily.

About seven in 10 feel everyone where they work is treated the same when it comes to various aspects of the workplace: 75% say so about the amount and quality of work assignments; 73% about being invited to employee social activities; 71% each about career advancement and promotion, being disciplined, and being invited to client meetings; and 69% each about being valued and listened to and salaries and raises.

With regard to experiencing discrimination in the workplace based on various characteristics, Black respondents are more likely to report being discriminated against at work based on their race (37%) than are Hispanic (24%) or white (13%) respondents. Those who report having a disability are nearly three times as likely to say they have been discriminated against at work based on their physical or mental ability compared to those who report not having a disability (36% versus 13%).

Has COVID-19 had an impact on diversity, equity, and inclusion in the workplace? Almost half (46%) of employed individuals nationwide feel the pandemic has had no impact, one in five feel it has had a negative impact (20%), and almost one in five say a positive impact (17%). Black and Hispanic respondents are equally likely to say the pandemic has had a negative impact on racial equity in the workplace (both 26%), and both groups are significantly more likely to say this compared to 17% of white respondents.

Taft Communications, a New Jersey-based communications firm with global clientele, commissioned the survey, conducted January 4-11, 2022, with nearly 1,400 adults in the United States, 18 or older participating. Click here for full methodology. Those polled identified themselves as currently employed full or part-time, in the military, and/or actively seeking employment but were employed in the six months prior to or at any time during the pandemic.

Taft is a communications consultancy with nearly 40 years of experience. Through strategic communications and leadership development, Taft guides clients to meaningful expressions of purpose to drive positive impact — for all stakeholders, including customers, employees, shareholders, communities, and the earth and environment. Taft ClearPoint®, the firm’s practice in leadership communications, is the go-to source for leaders and aspiring leaders to acquire the skills needed to master today’s “constant conversation.”

ABOUT THE EAGLETON CENTER FOR PUBLIC INTEREST POLLING (ECPIP)
Home of the Rutgers-Eagleton Poll, ECPIP was established in 1971 and is the oldest and one of the most respected university-based statewide polling operations in the United States. Loaded at the Eagleton Institute of Politics at Rutgers University, ECPIP is now celebrating its 50th year and the publication of over 200 polls. ECPIP’s mission is to provide scientifically sound, non-partisan information about public opinion. To read more about ECPIP, please visit our website: eagletonpoll.rutgers.edu. You can also visit our Facebook and Twitter.